Most Popular | Newest | More Options >
[X]
More filter options:
It's Like A Miracle

Recently I was given an old, big dog (around 10 or older). He was overweight and lost the weight when ill over the winter. Still he had great difficulty getting up and down, from arthritis. A friend gave me a 1/2 bottle of Dr. Frank's Joint Pain Relief. It worked like a charm, IMMEDIATELY. Friends who saw the dog one day saw him a few days later and commented on how much better he was.

So I went online out of curiosity to research the company. After 2008, there are no more comments about Dr. Frank's product for animals. But what's interesting is a veterinarian with her own products pops up when trying to find this product. And there is a deluge of websites with negative comments!

My bottle is dated June 2011, I've been using it for 6 months and it'll last a long time. My vet said this breed (black lab) often doesn't live past 10. I am giving him a better life in his last years of life. I'd hate to think the company is being shoved out because it's too good to be true. One bottle should last a year. I also tried another more expensive product, chewies that I got at our feed store. Didn't work as well!

Y'all can say what you want about the ingredient of Mercurius Vivus in Dr. Frank's Joint Pain Spray for Dogs and Cats but the product is nothing short of miraculous! My 12 years old wolf/shepherd used to be extremely athletic but in most recent 9 mos. became almost crippled due to arthritis and degenerative hip joints. She was in so much pain that she would attempt to bite most anyone that even got close to her.

I was mixing is a full-strength aspirin with her food each day which made a big difference in her disposition; knowing, however, this would eventually get her sick via stomach or kidneys - yet was getting her through the day more pain-free. I was contemplating putting "her down" when I saw Dr. Frank's ad on TV. Believing there was nothing to lose, I purchased a small bottle not actually thinking it would work.

After 1 week of use, I was nothing short of amazed at her transformation. She once again was running, jumping around when excited and going for walks. She was ready to go in the mornings, running up and down stairs multiple times, no longer laying down to eat and drink. After 2 weeks, her negative attitude reversed completely. She was friendly towards everyone again, excitedly approaching people, wanting to play...happy again. She was the dog she once was 5 years earlier.

Whether the mercury in the pain spray is at toxic levels or not - its effects are astounding. Nothing short! When her time does come, at least it will be much later than it would have been without the spray and she can go with much more dignity than she would have otherwise. When you do care about your pet, the quality of their life is crucial. To be in extreme pain, depressed and isolated for months to years, I do not believe is in their best interests. I will use this spray until she no longer responds. I highly recommend it for all pets with serious and chronic joint pain. Don't comment if you don't know.

I would like to comment on the opinion that the homeopathic spray for joint and muscle pain by Dr. FRANK is unsafe, having mercury in it, that whoever is interested to learn something wonderful should examine this form of medicine called HOMEOPATHY. I have been studying and using this form of medicine for most of my life. I have used HOMEOPATHY on my children and suggested it to others and with wonderful results.

There are all sorts of forms of arthritis and all sorts of natural remedies for each type but HOMEOPATHY which is what this form of spray is, may only work on certain types. Medicine is NOT an exact science, medicine is an art. Every living creature is a little different than the next. The form of mercury in this spray is not harmful. I WILL SAY THAT THE MERCURY IN THE VACCINES THAT ARE USED IN CONVENTIONAL MEDICINE ARE VERY QUESTIONABLE.

Remember, always consider the source. Anyone who puts down natural remedies may be in the pharmacy business or ignorant about the subject. Ask this question why did I develop arthritis and or why did my pet develop it? Also what is the form that my pet or I have ? Aging? Maybe our bodies are not absorbing the nutrients from our food the way they did when we were younger. Adding high-quality supplements fresh natural food sun and air to any medicinal program is key to good health.

Also remember as we age, our hormones deplete and so do our pets. Hormones regulate all of our bodies functions. You may also want to google THIS "NATURAL HORMONE REPLACEMENT THERAPY". Try all forms of natural medicine, something will work - IT always has for me. Love to all!!

I saw a commercial on television about Dr. Frank's pet pain reliever spray, so I went to their website. I was very disturbed by what I found. The product has Mercurius Vivus in it, here is the description they give for this: Mercurius Vivus - The treatment is derived from the element mercury. This remedy has no toxicity because the mercury is diluted to such extremely small amounts.

Mercury is fatal no matter what amount or form it is in, if ingested. I have sent an email to the company, asking them how they can sell something with Mercury in it. If I had not read the ingredients in Dr. Frank's pet pain reliever, I would have bought it, not even realizing the damage it would do to my dog.

DEPTFORD, NEW JERSEY -- I recently purchased Dr. Frank's no pain spray for pets. I am trying it out with little results. My complaint is that they automatically send a shipment out monthly without authorization of customer. What a scam. You try to call you get recordings to leave a message. They don't refund the postage that they sent to you without your knowledge so you get screwed out of postage. Is anyone else having these problems? What a rip off, Dr. Frank's. Once they get your credit card number, they just automatically bill you monthly, that just burns my butt. 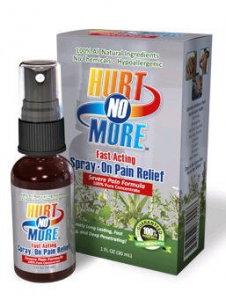