CARROLLTON, TEXAS -- As I was searching through Google I saw this link for Intl Motors showing such a poor rating. As I searched the site - it seems like a log for just complaints. I felt compelled to write something here sharing my experience. I have purchased 4 cars from Intl Motors: for me and for my 3 children.

The lady that owned the business before sold it in 2012 or 13. I have had nothing but awesome experiences buying each of our vehicles. Not only did the owner himself assist me during the purchases, but he saved me so much money after the sale! I have ordered tires, had brakes done and shocks done all at wholesale cost- in fact, he didn't even charge me labor one time! We absolutely LOVED our experience with the folks at Intl Motors! I will continue to buy from them whenever we need cars. Great cars for great prices.

CARROLLTON, TEXAS -- These people are a bunch of con artist who are money hungry scammers! All of their cars are junk and lemons! They purchase these vehicles from the auctions And only do certain repairs so you can drive it off lot only to find later out it's a piece of crap! I bought a Range Rover from them in November 2012 And was convinced to buy the gap insurance (Which I later found out my vehicle wasn't even qualify to purchase this insurance But they sold it to me anyway)! Not even 3 days later the car completely locks on me and will not start!! I later found out the alternator was bad and had to replace it for $1800!

I tried to talk to Bridget to see if there was a way they could split repairs or even have me return the car and exchange it for something else! She proceeded to curse me out and tell me that I was an idiot for paying $1800 for the repair Although she was the one who referred me to this mechanic!!! Sure enough After getting the alternator fixed, I found out that there are oil leaks on the car and that's another thousand dollars! In a matter of 4 months, I have managed to spend over $7000 in repairs on this vehicle!!!

This was the biggest mistake that I have ever done in my entire life! And these people at International Motor Productions are scam and they sell a bunch of junk! Please do not make the same mistake I did do not buy from these people!!! Save yourself the agony and go to some professionals!!

CARROLLTON, TEXAS -- I recently was going to purchase a BMW from Brigette at International Motor Production in Carrollton Texas. I live in Chicago and saw the posting on the internet. I called Brigette for information on the vehicle and she described it as a 9/10. According to her she doesn't give any vehicle a rating of 10. She said it ran great and looked great. I called a few days later and asked about the car again. This time asking more specific questions about mechanical condition, tires, etc. Again she said it was in great shape and that it needed nothing. I decided to put the $500 deposit on the vehicle and flew down on the weekend.

I looked at the vehicle and discovered the body panels didn't line up. Also, the tires were mismatched and looked worn. After taking a test drive, I heard awful noises coming from the area where the panels didn't line up. Also, the car pulled under acceleration. I quickly found a reputable dealer in the area that inspected the vehicle that instantly could tell the car had been involved in an accident and had frame damage. I returned the car to the dealership and asked politely for the deposit and told Brigette what I found. She refused to return the deposit and would not let anyone test drive the car with me so they can see the issues I found.

She misrepresented the car and would not consider rectifying the situation. THIS DEALER IS A FRAUD! I read other reviews of this dealer with similar situations. Check the Better Business Bureau and State Attorney General's office in Texas for their record. I currently have a pending case with both.

CARROLLTON, TEXAS -- We bought a 1994 BMW 325i from the "girls" at International Motor Production. We were told the car was in good shape, it would be sold that evening if we didn't buy it, blah blah blah. One week after buying it, it broke down and we took it to a BMW mechanic in Dallas. Guess what? $4,000 in repairs. The car had been totally screwed with. The mechanic couldn't believe that someone would sell a car in this condition to anyone without disclosing the problems. I know, I know, we didn't have a mechanic look at it before we bought it b/c we thought a place like International Motors would stand behind their product.

We had read a glowing article in D Magazine about their business and how good they were. So after paying $9,000 for a $5,000 car, we wrote the "girls" a letter and asked if they would help us with the repair bills since they represented to us that the car was in good shape and they basically told us to go to hell.

And another thing, before the problems started, we could never get them to return our phone calls about the title, plates, etc. Not one time did they return our calls. In fact, when the title and plates did come in, we had to drive 55 miles to pick them up b/c they would never call us back or mail the plates as they promised. I WILL NEVER RECOMMEND THESE GIRLS TO ANYONE. They suck. 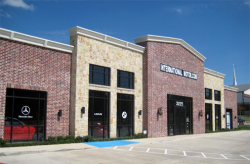