PENNSYLVANIA -- My family purchased a Jayco Bungalow bhs and had many problems. Most of them in the first 3 months. Jayco gives you 3 free service calls. You will need everyone of them. The dealership came out 2 or 3 times and didn't charge me for a road trip. That's how many problems I had with my jayco.

LP gas detector was faulty. It went off for 6 months then the dealership finally replaced it. If it didn't sense gas, dealership said it was ok. It wasn't ok. It scared the hell out of my family members during the nights. Jayco was informed about the lp gas detector and did nothing about it. They said the lp gas detector can go off from cutting the grass, taking a shower, using hair spray, lubricate sprays etc. Mine went off with none of those things happening. It was mostly in the middle of the night when people are sleeping.

Pipes leaked under the kitchen sink and bathroom sink. Had to be fixed 2 or 3 times. Microwave oven broke in first 2 months and was replaced 4 months later. Sink baskets replaced because the paint chipped. Blind was replaced in bedroom. There was some wood stain on it. All doors had to be adjusted. Bathroom, bedroom, patio, and other outside door. Closet door was always crooked, never been fixed or replaced. Refrigerator had to be leveled. The camper was always leveled from the beginning. The floor is crooked. The freezer door didn't close so it had to be tilted back which it looks stupid.

Couch cushions are flat. They send me a piece of foam. Sleeper couch is very uncomfortable. Its like sleeping on springs. I am looking for a piece of memory foam to lay on top. Lp gas detector is defective and was replaced 5 months later. Ceiling fan runs over the sky light and flickers. I had to buy a vent shade for it. Shower strip tore off. Had to be replaced, and tore again. Bathroom closet door is crooked and someone walked against it and broke the corner that was sticking out. Gas hot water heater sometimes doesn't work when it rains. Dealership says because of moisture and dampness. Its very unreliable.

Wood is crooked above the bed is not flush. It looks stupid. The nut from the ceiling fan comes loose. 2 back bedroom blinds keep falling down when you put them up. Refrigerator bottom piece doesn't snap on the right side. Condensation build up on the windows. Puddles of water lay on the frame. Valance was replaced in bedroom.

Heated underbelly is a very poor job and I told jayco several times about it and they won't fix it under the 2 year warranty. Breach of contract and false representation. I used 5 30 gallon tanks of propane in 5 weeks in may. The camper is very cold and not insulated good.

The most important part is the lp gas detector. That is a matter of life and death and the dealership and jayco played it like it wasn't important. My lp gas detector went off within the first month of my purchase. The dealership came out and did a leak test and couldn't find a gas leak. It should have been replaced then. During the whole summer it kept going off for no reason and scaring the hell out of my family. It took jayco and the dealership 6 months to replace it. I dislocated a disc in my back for jumping up to turn it off. They think this is a joke. If you want something fix right, it could take months of asking.

The pictures of the camper looks like theres a lot of space. Under the kitchen sink, theres hardly any room at all. Its just access to get to the hot water heater. The cupboards along the side of the refrigerator are very narrow. Theres a lot of hidden cords and pipes that take up a lot of the cupboard space.

Jayco will not refund my money for the poor job they did on the heated underbelly. They said if I tell my story that they wouldn't compensate me for anything. They never offer me any compensation. They did promise me a free service call for 2009. Lets see if they keep that promise.

Jayco won't stand behind product. They make dealership do all work and the dealership has to take full responsibility for mistakes, defective parts that jayco installed. The dealership is not equipped to fix problems like the heated underbelly or crooked wood. Don't waste your time contacting jayco. Jayco washed their hands once the camper leaves their lot and sold to the dealership. I have emails to prove my information. 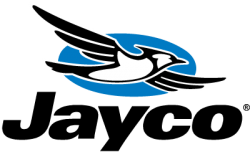