STERLING HEIGHTS, MICHIGAN -- In December I turned in a leased Jeep Liberty and purchased a new Compass from Monicatti Chrysler Jeep in Sterling Heights. I made a down payment of about 30% and financed the rest through the dealership. I was told at the time that the $318 lease turn-in fee would be waived. However, since then, Chrysler has refused to honor this and has been calling and sending letters demanding payment.

I then called Gerry, the Monicatti salesman who sold me my new Compass. He said that the same thing happened with another of his customers. That customer apparently threatened never to buy another Chrysler, and (so I'm told) Chrysler waived the charge in his case. He said that the Chrysler Financial people refuse to talk directly with the dealers about this.

Well, that tack didn't work for me and Monicatti management has been of no help. I stopped by the dealership on March 2 to plead my case one last time, mentioning that I needed a response that day. Now here it is March 5, and I've still not been contacted by Monicatti. Meanwhile, today I received a call from Chrysler Financial. This was their "final attempt" to collect from me before taking additional action, whatever that may be.

So here I am, told by the dealer that since all I had to do was buy or lease another Chrysler vehicle, and this fee would be waived. Whether or not the financing had to be done through Chrysler Financial never entered into the discussion. So...I bought a Chrysler vehicle, and now I'm about to be sent to collection by Chrysler as if I'm some sort of deadbeat.

I have no intention of paying this fee--it's nothing short of extortion based on deception--so I guess I'm going to be sent to collection. In the meantime, I have sent letters of complaint to all of the top Chrysler executives in Sales, Marketing and Dealer Relations. Tonight I'm going to file complaints with the Better Business Bureau regarding both the dealership and Chrysler Financial, then explore other options as well.

Apparently DCX must not be in such bad shape after all. If that were the case, one would think that this company would be more inclined to cultivate repeat business from its customers, instead of going the extra yard to rip them off.

STERLING HEIGHTS, MICHIGAN -- Where to start? When I leased my Jeep Grand Cherokee the salesman told me that I would get free oil changes for the lease duration. Later I found out that it was an extra he charged me for without telling me that it would cost extra. Now when I take it in for my free oil changes, the service department is always trying to get me to pay for additional services, like changing the front and rear differential fluid.

This Jeep is brand-new, so I said no. Days later I noticed a leak coming from the Jeep. When I took it to the dealership they said that it is coming from the transmission and that it is a result of me not replacing the front and rear diff. fluid. They then said that they would not fix it (which is covered under warranty) unless I paid $194 to have the diff. fluid changed. What a scam! Monicatti Chrysler Jeep must be on hard times, to have to scam their customers so bad. My advice, go somewhere else. 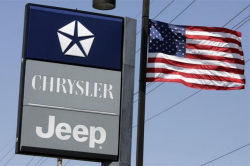