BRUNSWICK, OHIO -- I purchased a 2000 Ford Van. The salesman told me they have only good working vehicles. After purchasing the truck on the way home the service light came on. I called the dealer and left a message. They returned the call on Monday. I told them I had the computer checked a code of #8 cylinder misfire. I asked what Ron Ferrari auto sale would do. The salesmen told me they would not do anything! I took the truck to a repair shop.

They told me that repairs would be over $490.00 or more because there could be more wrong. I never was offered a Carfax as it said on the website. I stopped payment on the check. They were so rude. Don't buy any vehicle for RON FERRARI AUTO SALES. I am sure I would never get any money back if I didn't stop the check. RON FERRARI LIES-LIES and more LIES.

The customer (can't fool me) test drove the van and checked it out. The check engine light was not on. He negotiated for a lower price and was also short some money. We let him owe us the balance due for 30 days. He bought the van AS-IS. He never asked for a carfax we would have pulled it if he had asked.
The salesman talked to him on Monday and explained that he purchased it AS-IS and also got $300 off the price so we could not fix the van for free. We offered to have a mechanic, that we use, look at it and it would probably cost him around $100-$125. The customer got angry and hung up.
At some point between Monday evening and Tuesday morning he brought the van and left it with a letter inside saying he was returning the van. We also found out that he stopped payment on his checks which cost us $60.
When we sold him the van we gave him some shelves,cabinets, and drawers that we had in the back of our building at no extra cost to him. He did not return these items when he brought back the van. Ron called him and asked him to bring the items he refused and said that Ron had to come and get them himself. Ron told him that he would take him to court if he did not retun them. Later that day he retuned these items but felt it necessary to bring a police escort which was ridiculous.
We repaired the vehicle for approximately $100. WE sold the van on the 29th to another customer who is completely satisfied
We did not lie or misrepresent the van in any way. 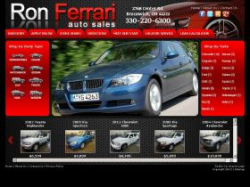