CHARLESTON, SOUTH CAROLINA -- In late Jan/early Feb myself, the bride, and a 2nd bridesmaid went to Bridals by Jodi to pick out bridesmaids gowns for a wedding on May 5, 2005. We picked out the gowns, and placed a deposit for them. We were asked if we wanted to pay an additional $15 for RUSH shipping because otherwise the dresses would arrive only 2 weeks before the wedding, and that would leave the alterations time a little short. Both myself and the other bridesmaid agreed to pay the extra money for this service.

There are actually several problems, 1. the dresses were not ordered as a RUSH which we paid for because they arrived when we were told they would had we not rushed them. 2. The other bridesmaid was charged for a plus sized gown (an extra $15) that she did not need to pay, and still had to pay most of the cost of alterations even though it was the stores fault, and 3. My gown was ordered a size to small. I picked up my gown on Friday, April 15, 2005 just minutes before the store was to close and was not allowed to try the gown on before I left.

On Saturday I went to a shop for alterations and discovered the error in size, and the seamstress told me there was no way to let the gown out as much as was needed. So, I called the store and spoke with the sales associate who told me that yes, it was her fault but that the owner was out of town, and she would call the manufacturer of the dress on the Monday morning. I told her that I had notified the bride that my dress was wrong, the girl at the store told me that I had no right to worry the bride like that (bear in mind at this point the wedding is only 19 days away at this point).

On Sunday, the owner calls me and leaves a message on my cell phone, stating that he needs to talk to me because I upset this salesperson. He did not call me back, nor did he leave a phone number for me to call him. At noon, Monday, I still had not heard back from either the owner or the salesgirl so I called the store. The same girl that I spoke with on Saturday answered the phone, and said she had been simply to busy to call the manufacturer and would call me in 20 minutes.

The call that I got was from the owner, who stated that he did not care if my dress was wrong, he did not care if the other bridesmaid dress was wrong, how did I know the dress could not be altered, and again how dare I upset his associate by telling her she ordered the wrong gown. At no point in time did this gentleman, and I do use the word loosely, ever say that he was sorry that his store made an error. He also flat out stated that he would not try to get the dress in, in the correct size.

After some heated discussion, he agreed to give me a refund, if and only if, I returned the dress on Tuesday, APril 19, the only day he would allow the return, and if the dress was returned "unharmed"! What exactly was I going to do to the dress? The owner also stated that he did not have to give me my money back and that once I had my refund I would not be allowed in his store ever again. As if, I would ever want to step foot in his store after the unprofessional manner this whole situation was handled in.

So far that is 2 bridesmaids dresses in a wedding that only has 2 bridesmaids and both dresses were ordered wrong, so they are batting 1000% in the error department! So, if you are getting married, do not shop at this store for your gown, or for your bridesmaids, there is no guarantee that they will get the order correct and they simply don't care about correcting the situation either. As it is now, the wedding is 16 days away, and I do not have a bridemaids dress, with little hope of getting one in time, and now the bride has to change her plans for her wedding.

In late Feb myself, the bride, and a 2nd bridesmaid went to Bridals by Jodi to pick out bridesmaids gowns for a wedding on May 8, 2010. We picked out the gowns, and placed a deposit for them. We were asked if we wanted to pay an additional $15 for RUSH shipping because otherwise the dresses would arrive only 2 weeks before the wedding, and that would leave the alterations time a little short. Both myself and the other bridesmaid agreed to pay the extra money for this service.

I first I was upset but then (after research) I found out that it is true that shop did not make a profit off the rush fee and that it allowed our dresses to cut the line in China and get the dresses earlier. I was probably a bch the first time I was told about the rush cuts for my bridesmaids so I apologized when I returned to the shop.
I was very worried about the bridesmaid dresses. I called the shop and came by a lot. Because my bridesmaids are a little larger than some I felt the bridesmaid dresses would not fit. I was also worried about the cost of alterations.

I felt like at some other shops I was not treated great because I am healthy size. However at Bridals by Jodi the staff went above making me feel great in my gown. They have a large selection of wedding gowns and bridesmaid dresses. I would recommend the shop to anyone shopping for a wedding gown, flower girl dress or bridesmaid dress. I believe they offer prom also

NORTH CHARLESTON, SOUTH CAROLINA -- I went into Bridals by Jodi in late January 2011 for an October 2011 in Las Vegas. I had tried several other bridal gown stores before and just wasn't getting 'this one is the one' vibe from any of the dresses I had looked at so far. I was the first customer there and I really appreciate the sales associate bearing with me because I picked out well over 10 dresses to try on. I'm really finicky, as any bride would be, about how I looked in the dress. When I came out with the dress that I ended up purchasing her facial expression was genuine as she shared the same feeling I did about the dress.

She made me feel very comfortable and eased my worries about alterations. She also gave me ideas for ways to "Vegas" my dress up and not be cheesy or tacky with them as well as ideas for my wedding/reception. She was very personable and I could tell that she really enjoyed her job. It takes a special kind of person to work in the bridal business considering how nasty some of the bridezillas can be. If I ever get the chance to recommend them to another bride/bridesmaid I will certainly do so.

NORTH CHARLESTON, SOUTH CAROLINA -- I recently got married in South Carolina and began looking for a bridal store. I was very wary of finding a bridal boutique because I have heard such horror stories revolving weddings, wedding gowns, bridesmaid gown etc. and I did not want my wedding day to be stressful one. After going to virtually every bridal boutique in South Carolina, I ended up buying my gown from Bridals by Jodi in North Charleston. Jodi was spectacular and spent a great deal of time helping me pick the wedding gown for me, and she made changes to it at my request.

Not only were they exceptionally friendly and professional, but both owners were also exceptionally flexible with my bridesmaids who were slow ordering their dresses, and ordered them after the cutoff date. They were able to get me rush delivery and took care of all of my needs. I would refer them to any Bride/wedding party and they have a large range of prices to fit any bride.

A husband and wife run the business and stayed late many nights for me since my work schedule did not permit my getting to wedding arrangements during the day. I would send any bride to Bridals by Jodi for wedding or bridesmaid gowns. I even brought them my wedding pictures after our wedding day.

CHARLESTON, SOUTH CAROLINA -- Just wanted to write a quick note on the fantastic service we received at Bridals by Jodi. We had a lot of special requests and the staff was extremely helpful. The gowns at Bridals by Jodi are beatuful but what really separated the shop apart was the staff. They gave us full attention but without trying to "sell" us anything. I really felt my bridal consultant wanted to find the dress that would be right for me rather than just make a sale. I would highly recommend Bridals by Jodi if you are getting married. 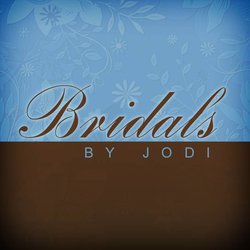