GARDENA, CALIFORNIA -- I decided to have my favorite lunch today. Top Ramen - Oriental Flavor by Nissin Foods. When I opened the package I noticed that the flavor packet had red tape on it that stated, "This Is Splicing Tape" with the Nissin name and logo on it. I called the Nissin Food Company, number 323-321-6453, and asked to speak to Consumer Affairs as per their website, http://www.nissinfoods.com/company/contactus.php.

I spoke to Ann and she explained to me that this tape is used to bind the packets together for cutting and packaging and that the ones that had the tape on them were supposed to be discarded. But that the spices in the flavor packet were safe to consume and that the packets were only discarded for aesthetic reasons.

She apologized and said that she would send some coupons for the inconvenience which I thought was very nice of her. I just wanted to let people know what the red splicing tape was in case someone else happens upon the same situation. The Ramen was wonderful for lunch, by the way. ^_^ 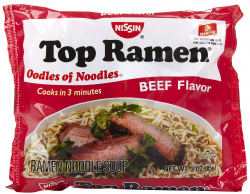