Most Popular | Newest | More Options >
[X]
More filter options:
The Most DISCUSTING Bacon We Have EVER TRYED to Eat- Fed It to the Dog-

We (my wife and I) got eggs and bacon to have a nice morning meal on the porch since it was early spring. WELL, when we opened the package of bacon, it was ALL this white FAT except 4 slices that filled up the window. It has to be packaged just that way on purpose. Any idiot can plainly see this at a glance. So that means the Ole Carolina people are ripping people off and planned it that way. We tried to take the bacon back, the store said it wasn't their problem - call the company. So we did. The Ole Carolina people, "Said we are sorry this happened to you but there isn't anything we can do. Enjoy your day." Then a hangup tone. So we fed it to our dog. We will NEVER EVER get anything from that company ever again.

CULLMAN, ALABAMA -- I really have to laugh at some off these reviews I'm reading, has people became that dense? Ole Carolina Bacon at a price of 1.90 to 2.25 a pack is a real value if you have the sense understand that this no top quality breakfast bacon. It's more for cooking and seasoning. What do they expect for that price. The flavor is very good and using it in different recipes it works very well. These people need to get a life and activate those 2 brain cells they have.

Have never seen bacon like this before. The rind was left on, all gross stringy fat except for one thin strip. The bacon curled up as it was cooking. Thought it was alive. Very salty. No bacon flavor at all. Will never buy an Ole Carolina brand of anything!

Replies
Review Link:
You Get What You Pay For

FRANKLIN, KANSAS -- You get what you pay for. $2.25, I purchased 12 oz from Dollar General. The color on the fat, in places, was very questionable, but the smell ok. It was not from smoking color. Tainted; a bit. You could not pull it apart in strips as a typical bacon, but rather threw the entire bacon in a pan until the fat cooked a bit to separate it. It cooked up nicely, but it tasted like eating salt from the can! I do not recommend this bacon, unless starving, and hope this company considers this review!

I purchased 2 packages of Ole Carolina bacon from Aldi in Missouri. After I found bones in the bacon while eating it, I contacted customer service. They told me they would look into the processing of the bacon and notify me of their findings after apologizing and promising to send gift cards. Never heard back from them and even tried to follow up with them only to get told someone would contact me. That was July and it is November now. DO NOT PURCHASE THIS BACON, my pictures of the bones would not upload.

I look in the view meat packaging and it looks like good meat. I take it home and open it to cook and it's nothing but fat. The only meat that was actually in the bacon is what I saw through the view meat. It was thin and I got very little meat from it. I will never buy this brand again, and this is not the first time this has happened to us.

Replies
Review Link:
What You See Is NOT What You Get...

SPRINGFIELD ?, ARIZONA -- I was shocked and appalled when I opened the package of "Ole Carolina Brand Bacon". It was almost ALL fat! It wasn't cut properly so there were no defined strips. The fat that was there was stringy and absolutely disgusting to look at. I was floored! When I was at the grocery store, I looked at the "representative slice", as I always do. It looked meaty so I went ahead and bought it. I've never felt so cheated. What a total misrepresentation of the product. I hope something is done about this because it is so wrong to deceive the consumer.

I find this to be highly misleading, and deceptive, and urge everyone to realize what the bacon looks like in the package is not going to be what you get. You may as well just buy lard. It appears you can rely on Ole Carolina to be misleading.

SPRINGDALE, ARIZONA -- This is the second time I purchased this brand. The first time it was great. Best bacon I ever had! That's why I went back for more. The second time I threw out most of the pound I had purchased. It was mostly fat. I couldn't get slices out of it so I chopped up what I could to fry it. Parts of it had a funny color and I cut that part out. There wasn't any real bacon flavor going on. I hope we don't get sick. Why was it so good the first time and so bad the second?

SPRINGFIELD, ARKANSAS -- I bought two packages of this Ole Carolina bacon because I looked through the "view meat" portion of the package and the bacon look like it was a good quality. When I opened the package to cook it, I was totally surprised and very disappointed. The strips of bacon was mostly fat and so thinly sliced that it shredded when I tried to separate the strips.

Although I bought it on sale, I still feel I didn't get my money's worth. Just imagine the poor people who paid full price for this rip off. I very seldom write reviews, but I felt compelled to write this one so maybe other people will be aware of this very poor quality and misrepresentation of a product. The product was distributed by TSD Sales and Distribution. 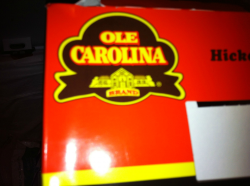