EASTON, CONNECTICUT -- The new scam is called a Tank inspection. First they insist you pay upfront more than the amount of oil you need. My friend told me they can and insisted on a tank inspection, and then stated his furnace needed expensive work despite the fact it was serviced the week prior. Now it is my turn. When I heard tank inspection I was immediately suspicious. They are late for the delivery and when I called they told me I was scheduled for a tank inspection. NO. I WAS SCHEDULED FOR AN OIL DELIVERY.

Next the driver calls and is on his way over. More of the same. I told him the tanks are inside and he can inspect those, but not the furnace inside. He agreed after some back and forth. But he delivered only 215 gallons instead of the approximately 500 gallons I needed and I was bill for 500 gallons! I've made a dozen phone calls about this. IT IS RIDICULOUS. AVOID AVOID AVOID THESE PEOPLE. VIGOROUS HAND GESTURES.

EAST HARTFORD, CONNECTICUT -- I have not had any delivery issues with these guys, the oil comes when they say it will. My issue is with the last 4 orders I placed and their coupon codes. Literally, within hours after placing each order, I received an email with a coupon code, which can't be applied to an existing order. This can't be coincidental if it happened 4 times in a row; we're talking about more than a year of orders here. I also rarely receive emails from them otherwise, which really highlights the sneakiness of it.

The last order I placed was on 9/30/19. On 10/1/19, I received a coupon code for 10 cents off per gallon. The coupon code expires on 10/15. Since there's no way I should need to order more oil before then, there is no way I'll be able to take advantage of the discount. This time I called them out on it.

When I called customer service, they said the coupon can't be applied to an existing order. But they changed their tune as soon as I mentioned that something suspicious is going on since I receive these emails like clockwork right after placing an order. I also see there is no way to cancel a pending order online (only reschedule), which would allow me to reorder the oil using the discount code. Customer service seemed a little unwilling to work with me but only did once coerced. Sneaky and bad business, period.

NORRISTOWN, PA -- BEWARE! Dollarwise is ripping people off in a very dishonest scam. Upon oil purchase in December 2018, Dollarwise highly encouraged me to prepay an additional $199 special for their system warranty which included annual oil furnace/hot water system maintenance tune-up, cleaning and filter replacement. Thought it was strange they were booked out 6 months from December into June to do the maintenance.

Today was the maintenance. The technician had bad news for us after 30 seconds in there, our hotwater expansion tank bladder was broken and it would be $1100 to repair. After looking this up, I found the tank and bladder is $29 at Lowe's. And this was suppossed to be covered by warranty. He said he couldn't do maintenance until repairs were completed. Had a reliable trustworthy HVAC company do a second look over and opinion. System is working fine. There is nothing wrong. Dollarwise is ripping people off in a very dishonest scam. BEWARE!

CONNECTICUT -- I am shocked to see negative feedback about Dollarwise Oil. I have been using them for YEARS and have never once had a problem. They always come on the date promised (which has never been more than 2 business days out) and their customer service has always been great. Furthermore, they often leave or mail a 5- or 10-cent coupon when they deliver. Their prices are always the cheapest per gallon as well.

PENNSYLVANIA -- They said they would deliver on Oct 19th. I called to verify only to tell me that because I was a new customer my tank had to be inspected. Ok, so they come over on the 17th inspect my tank. I am then told a technician will need to come and tighten my fill pipe so no threads are showing. Ok fine. The next day the tech comes and they determine it's fine. My oil will be delivered the next day which is now the 19th. I started with a 1/4 of oil. The weekend goes by then Monday. No delivery. Call them, the driver apparently went to the wrong house, gave them 2.4 gals of oil, said I was full and left. Um nope, now I have 1/8 of a tank of oil. It's Oct 23 & they still have not delivered the oil I paid for on Oct 15th!

I got a call this morning Oct 23rd at 7:15 am from the dispatcher I am guessing, apologizing for the error and they will deliver today. Now I call today Oct 23rd at 3:30 PM and they don't have me in for a delivery and the notes say my tank is full!!! REALLY!!! I am currently waiting for a call back to find out from the DEPOT if they actually delivered today because nobody can tell me. I will update after my call. I am fuming right now!!!

UPDATE: No callback! I arrived home to find no oil had been delivered as promised. Called DollarWise again and spoke with Lina again. She said my account had been refunded! Then they wanted to charge me for the 2.4 gals they delivered somewhere else! They still can't tell me what address they went to. I am going to follow up with the Better Business Bureau. PEOPLE DO NOT GIVE YOUR BUSINESS TO THIS COMPANY! READ THE REVIEWS! I WISH I HAD! The names of the people I spoke with are Lina, GiGi, & Carlos. Bruce the manager never seems to be available or he isn't there! They told me it wasn't their fault. Can you imagine? I guess it must have been mine!!!

Replies
Review Link:
Quite Possibly the Worst Customer Service Ever

WILMINGTON, DELAWARE -- I work in customer service and understand that things happen. I am normally very forgiving when it comes to issues but this companies customer service or lack thereof is the absolute worst. I cannot recommend them to anyone.

Let's start from the beginning. I started using DollarWise for oil delivery, they generally have very good prices and I get oil delivered most times without issue. The problems began when they started telling me the whistle on my tank is not working properly. Fair enough, I scheduled the DollarWise repair team to come out. They found nothing wrong and wanted to charge me $100.00 for the visit.

So to recap they tried to deliver oil from their company to my house, then told me the tank was broken, then sent their own repair company out to fix it only to tell me nothing was wrong then tried to charge for it? Doesn't make sense. I told them I was not paying it. Everything was good for a while.

Let's fast forward a few months later. I place an order for delivery. They show up and tell me the whistle is not working again. I called and scheduled service and told them what had happened the time before and wanted to make sure I wouldn't be charged if they found no problem. They agreed.

I set an appointment for the same day with a 5 hour window. They call me 2 hours after I make the appointment to tell me they cannot come today and they would come tomorrow. Fine. My wife took a half day off work to sit at home and wait for them to arrive. They told us they would come between 2 and 6pm. 5:45 arrives and no one has shown so I call and ask if someone is still coming out. They cannot answer my question and say they have notified the tech on call to call me. Fine.

45 minutes passes and no one shows and no phone call. I place a call to main customer service and again tell them I need to know if and when someone is coming out to look at it. I was reassured by the customer service representative that they would get it resolved. Not only did she say it would get resolved but that she would follow up 2 days later to make sure everything was OK. Here I sit 2 weeks later, no phone call, no follow up call, no apology, nothing.

Thanks DollarWise, you lost a customer not only from your service department but also from your delivery department. I'm sure no one from the company cares as is evident from my experience. I wrote this to try to avoid someone else having the same issues I did. Do yourself a favor and pay a little more somewhere else and deal with a company that cares.

CONNECTICUT -- I received a 20 cents off a gallon coupon in my email and went online to order oil. I tried 3 times but kept getting the message "there is a problem with your account." I called and left a message, having been told I would receive a call back. That never happened. So I called back and was told that there was a copper pipe that looked worn and needed to be replaced. I explained that I was renting the house and would have to inform the landlord. They said that after the pipe was fixed I could call for them to deliver. I asked if they would honor my coupon for the $0.20 off per gallon and was told NO. I am so DONE with these people. I DO NOT recommend Dollarwise oil.

PORTLAND, CONNECTICUT -- We called for an oil delivery during this past winter and scheduled a delivery. The lady was very helpful and assured me that my credit wouldn't be charged until the oil was delivered. The oil was not delivered at the scheduled day or any other day because the driver said he could NOT make it up the driveway. I continued to buy diesel fuel at a corner gas station until I got another oil company to deliver. Dollarwise charged my credit card anyway for $500.00 and didn't deliver a drop. I am still fighting with them 4 months later. DON'T give them your CC#.

Replies
Review Link:
Scam Business, They Are Not BBB Accredited - Stay Away - Not Worth It

EAST HARTFORD, CONNECTICUT -- We all try to save a buck here and there especially on products like fuels that we are essentially going to burn. Unfortunately this company has no integrity, no BBB representation and zero customer service. I was a loyal customer, always paid up front, never an issue on my end but on their end, nothing but problems.

Fraudulent billing for deliveries never made. If you prepay with a credit card how do you add charges, some upwards of over $500 for deliveries that were never made with ridiculous pricing. Deliveries to wrong house or to a different tank or never showing up while your tank runs low. It's NOT WORTH IT! Call around to your local oil companies and you'd be surprised, you can get quality service and pricing directly from your local people. If they aren't willing to work with you, find someone else but don't resort to Dollarwise oil. You will regret it sooner or later. 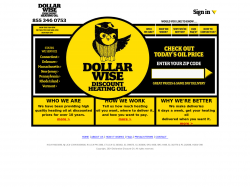